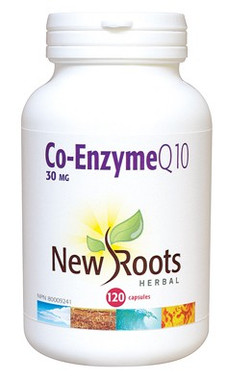 Adults: Take 1 or 2 capsules twice daily or as directed by your health-care practitioner.

Production of CoQ10 by the body begins to decline as people reach their twenties; perhaps the most recent threat to critical levels of this coenzyme is associated with statin use. Statins inhibit the production of both cholesterol and coenzyme Q10, as they are both synthesized from the same substance, mevalonate.

Each 30 mg capsule of New Roots Herbal’s Co-Enzyme Q10 is fermented according to the Japanese pharmacopeia standards to meet the body’s needs for this coenzyme that is critical to all metabolic function.