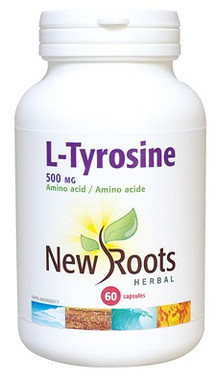 l-Tyrosine is a precursor of the neurotransmitters epinephrine, norepinephrine, and dopamine, all of them extremely important in the brain. It also supports sex drive and withdrawal, and protects against ultraviolet light.

l-Tyrosine is a nonessential amino acid (protein building block) that the body synthesizes from the amino acid phenylalanine. Tyrosine is important for the structure of almost all proteins in the body.

l-Tyrosine, through its effect on neurotransmitters, may affect several health conditions, including mood disorders. Preliminary findings indicate a beneficial effect of tyrosine, along with other amino acids, in people affected by dementia, including Alzheimer’s disease. Due to its role as a precursor to norepinephrine and epinephrine (two of the body’s main stress-related hormones), tyrosine may also ease the adverse effects of environmental, psychosocial, and physical stress.

l-Tyrosine is also a direct precursor to thyroxin, a primary thyroid hormone, as well as adrenaline and noradrenaline. Thyroxin has been found to increase the metabolic rate and control the growth rate.

l-Tyrosine is a necessary amino acid in the production of neurotransmitters including epinephrine, norepinephrine, l-dopa, and dopamine. l-Tyrosine also appears to have a mild stimulatory effect on the central nervous system. Patients with a thyroxin deficiency have symptoms including excess weight gain, cold hands and feet, and decreased basal metabolism. l-Tyrosine has been found to assist in optimizing thyroid hormone levels as well as increased mood, concentration, and productivity.

l-Tyrosine is used to treat conditions such as mood disorder, poor coping ability, fatigue, low sex drive, low metabolism, and drug abuse (when combined with tryptophan). It can also improve endurance under stress and is effective as an appetite suppressant. When taken properly, l-tyrosine can assist a sluggish thyroid and aid the dieter in losing excess, unwanted pounds.

l-Tyrosine is converted by skin cells into melanin, the dark pigment that protects against the harmful effects of ultraviolet light. Thyroid hormones, which have a role in almost every process in the body, also contain tyrosine as part of their structure.