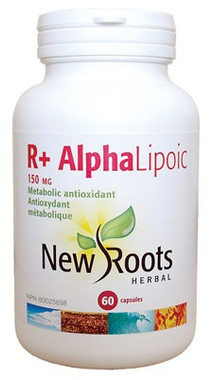 R(+)–alpha-Lipoic acid is the natural form of ALA that plays a pivotal role in the extension of the lifespan of the body’s key antioxidants.

Adults: Take 1 capsule three times per day or as directed by your health-care practitioner.

Common alpha-lipoic acid supplements are a 50/50 mixture of the natural R-lipoic acid and the synthetic S-lipoic acid; these mixtures are called “racemic mixtures” or “racemates.” In some cases, S(−)-lipoic acid is simply less effective than R(+)-lipoic acid. But in other cases, the S form actually acts in opposition to the activity of R-lipoicacid. Only the R(+) enantiomer exists in nature; it is an essential cofactor of four mitochondrial enzyme complexes, and the only form our bodies can synthesize.

alpha-Lipoic acid also plays an important role in the synergism of antioxidants, what some doctors prefer to call the body’s “antioxidant network.” It directly recycles and extends the metabolic life spans of vitamin C, glutathione, and coenzyme Q10, and it indirectly renews vitamin E.

In Germany, alpha-lipoic acid is an approved medical treatment for peripheral neuropathy, a common complication of diabetes. It speeds the removal of glucose from the bloodstream, at least partly by enhancing insulin function; and it reduces insulin resistance, an underpinning of many cases of coronary heart disease and obesity. The therapeutic dose for lipoic acid is 600 mg daily (the richest food source of alpha-lipoic acid is red meat).

From a therapeutic viewpoint, few natural antioxidants are ideal. An ideal therapeutic antioxidant should fulfill several criteria. These include absorption from the diet, conversion in cells and tissues into usable form, a variety of antioxidant actions (including interactions with other antioxidants) in both membrane and aqueous phases, and low toxicity. alpha-Lipoic acid is unique among natural antioxidants in its ability to be a highly effective therapeutic agent in a number of conditions in which oxidative damage has been implicated.